My contract with OV ended in early December with a fun 5 @ 5 concert featuring the cello section. I was in Bach's Brandenburg concerto no 6 - such fun to play.

There was more Bach in early Jan, this time at A=415 with a baroque group performing Cantata BWV 248V in St John's Southgate. It took the bass 48 hours to settle down to the lower pitch, which is a semitone lower than it is used to.

And between the two was the annual New Years Eve concert with the Auzzie Pops Orchestra. This year we stayed in Melbourne rather than partying the fee away on the Sydney tour! The accountant is happy about that. So the poor bass went from a Mario Lanza medley to Bach in the space of 3 days. Variety really is the spice of life.

My next project was the Residential Summer String Camp at Camp Clayton, near Ulverstone, Northern Tasmania. A huge mob of musos ranging from 7-70 were divided into 4 orchestra and 20 chamber ensembles and yours truly was the bass tutor this year. As the picture attests, we survived a tiring by fun week.

At time of writing I am working on a Beatles cover band gig in Hamer Hall. Great arrangements by Nick Buc. Such a lot of fun. 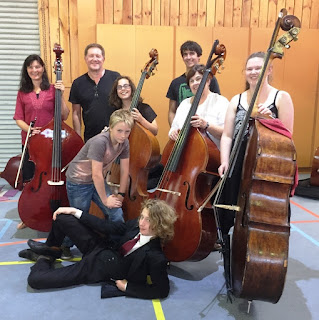