We are a month in to the Ring project - the first time it has been performed by Opera Australia. Its been done in Australia before, but never by the flagship company.

The orchestra is called rather grandly the Melbourne Ring Orchestra. Its basically Orchestra Victoria with a large number of augmenting players, many of whom are world best musicians. Its given the band a real lift, and its sounding just wonderful.

I am one of the principals, which means I am rostered off Siegfried. Its a shame I will not do the whole cycle, but ergonomically its good news as the schedule is crippling.

Pietari Inkenin is wonderful - we are very lucky to have him stand in as conductor are short notice.

The orchestral readings are over, and we have met the singers - what a cast, including:-
Brunhilde - Susan Bullock
Siegfried - Stefan Vinke
Wotan - Terte Stensvold
Siegmund - Stuart Skelton, and many more

Photo - the bass section for Rheingold in rehearsal at OV in Albert Park. We are in a long line across the back, which is how its done in Bayreuth, and other notable bands such at the Vienna Phil. But am not sure I like it - we are a long way from the celli and its difficult to get a section sound stretched out in a long line - the player at either end are a long way from one another, and more worrying from the principal bass. But seems to be working - the orchestra and the basses in particular are sounding awesome. Thats me with the Lott 2nd from Right. The section is Matthew Thorne, moi, Davin Holt, Dennis Vaughan, Emma Sullivan, Hugh Kluger and out of shot Miranda Fitzgerald and Nic Synot. And the other players not on this photo are Kylie Davies and Lowri Morgan, who were on thier way from the UK when this shot was taken. 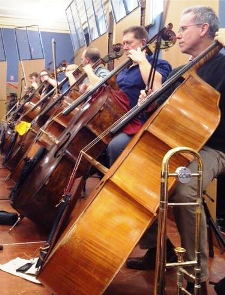 Posted by Stuart Riley at 10:13 PM No comments: