That sweat-drenched face was bearing down upon us like the archangel of vengeance himself as we almost disemboweled ourselves with feverish effort. Then suddenly, a spine-chilling wail:
"Pi-a-a-a-n-o-o! Bassi! Contrabassi! You grunt away like pigs! You sound as if you were scratching your bellies--szshrump! szshrump!" he would bellow, while, tearing at his clothes, he viciously pantomimed the scratching. "Corpo del vostro Dio! PI-A-A-NO!"

"But Maestro," a player would sometimes protest in a small, hesitant, and resentful voice. "My part is printed 'forte.' "

"What you say?" the Old Man would growl menacingly, unbelievingly, distracted for the moment from his tirade.

"It says 'forte,' " the player would reply, this time in an even smaller, more apologetic voice.

"What? Forte? FORTE?" with an air of incredulity. "What means 'forte'? Ignorante! Is a stupid word--as stupid as you! Is a thousand fortes--all kinds of fortes. Sometimes forte is pia-a-a-no, piano is forte! Accidenti! [Damn it!] You call yourself a musician? O, per Dio santissimo! You play here in THIS orchestra? In a village cafe house you belong! You don't listen to what others play. Your nose in the music--szshrump! szshrump! You hear nothing! You cover up the oboe solo! One poor oboe--one!--and you szshrump! szshrump! Where are your ears? Look at me! Contra-ba-a-ss-i!" in a long,
drawn-out wail. "Tutti! Tutti! Vergogna! [Shame!]"

Posted by Stuart Riley at 11:40 PM No comments:

On the road to Mordor....with MSO

After a month of very enjoyable ballet with The Australian Ballet and Orchestra Victoria, am off to work with Melbourne Symphony for over a month of action packed music.

The orchestra has one day to recover from the Two Towers, the score of the second Lord of the Rings film which we performed on 12-14 July. Wow, its an epic, on the big screen and in the band. Great music, Wagner-esque, with all the characters having leitmotivs. Its a fab bass part, lots to play, in the zone, much of it on the C string. But what a workout - no need for the gym last week! No less that six players were injured doing this show - piccolo, bass clarinet, a viola, two celli and one bass player. Seriously hard yakka.

I finally have my contract for the Opera Australia Ring Cycle later this year. At this stage I dont know which of the operas I will be performing, but it will be 3 out of the 4, and I will do the rehearsals for the 4th, as I will be covering it. We will have 7 bass players performing each one, with 3 covering.

Photo - The MSO performing Lord of the Rings - The Two Towers 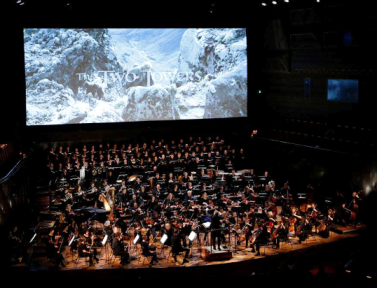 Posted by Stuart Riley at 7:43 PM No comments: