October 2011 was another busy month. The main course was my WNO trial - the company prepares 3 operas in Cardiff then hits the road on tour, a week in each port. The first was the Empire Liverpool, another first for me to work in that city. The Empire is a wonderful old theatre, huge pit, great sound. Kayta went well, even if the house was only 1/3 full, which is a shame as its a terrific show. I met Danny Hammerton after the Katya show - great bloke and we got talking about old basses. Nothing new there then!!

Forest Phil opened thier symphony series for 11/12 with a concert on 16th October, featuring Vaughan William's "lush" Five Variants on Dives and Lazarus and Rachmaninov Symphony no 2. The latter was a first for me - great tunes. The former I had played before, 20 or so years ago, and a show that will stick in the memory. Nigel Amherst was conducting a chamber group in Cornwall. When we got to the end of the theme section, where the celli and bass gets the tune there a huge thud came from the bass. Nigel and most of the audience looked over in shock. To this day I have never broken a bass string, and I thought to myself, "be cool, a string has gone, just work out which one it is, and carry on". They were all floppy, no break at the bridge, none at the nut......what could it be. Nigel stopped the show, we inspected the bass and found the tailwire had broken, but luckily for me it was a stiff wire, that failed, opened an inch or so but kept its shape, or else the strings and bridge would have flown in all directions. I found a wire dry cleaning clothes hanger in the car, bent it in the interval to make a temporary tailwire and did the second half of the concert on my bass. One for the memoirs. There were no such dramas in Walthamstow, thank goodness.

The last show of the month was with the Scottish Ensemble, a youthful, talented, tight knit hi energy group that remind me for all the world of the Australian Chamber Orchestra - they have in fact worked together in a London prom. Jon Morton, leader/director played Vivaldi's four seasons with style and panache in the first half and Bobby McDuffie directed us thro Philip Glass's American Four Seasons, his violin concerto no 2 in the second half. It was a memorable occasion - SE are fantastic in every way and the result was an electric performance that was a honour to be able to take part in. Nicky and I stayed with Mike and Glynis Calder in Helensboro - Mike was my first bass teacher. I met Terry Darke, ex SNO, so there were lots of bass conversation going on, despite Nickys yawns!!

Scottish Ensemble
Posted by Stuart Riley at 3:11 AM No comments: 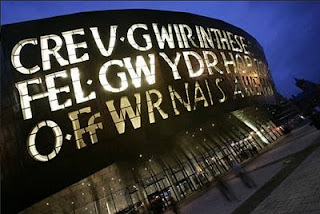 September was all about WNO - the start of my trial for principal bass. There are three bass players on trial - I am one of two based in the UK, and there is a third coming over from the US for a week's work on an orchestral concert in late Oct. Kai Carson West is principal for Don Giovanni, and half of Barber of Seville - I am doing the other half of Barber and all of Janacek's wonderful opera Katya Kabanova.

WNO is a stunning company and orchestra - this is my real view, not just a flimsy attempt at point scoring should one of the band come across this blog! I am seriously impressed with all musicians I haver worked with to date. It has been tough - its a trial in every sense of the word, which is the way I guess it should be.

Lothar Koenigs is WNO's principal conductor - he is passionate, focussed, incredibly well prepared, very clear and consistant among his other talents. There are not many conductors for whom that list of adjectives could be applied. He is also driven - he pushes himself and all those around him to the limit, and sometimes beyond, in his focus in the best possible result. This creates pressure for all of us. The result - a stunning interpretation of Katya, one that should not be missed. I have learnt a lot.
Posted by Stuart Riley at 1:32 AM No comments: