Its good being back in Melbourne and catching up with some friends. My first gig back featured Also Sprach Zarathustra with the Melbourne Symphony Orchestra and the amazing Andrew Davis. One for the memoirs. Its a real workout, but I had a lot of fun sitting on the back row with "the three musketeers"- thanks Benny, Damo and Stevie.

After that I did a Brahms Requiem gig in the Town Hall with the Royal Melbourne Philharmonic. Wow, Brahms could write for the bass.

Next was a recording session for a new IMAX film, The Railway Man.

And after the great news that the Seekers had reformed for a big tour, we had the shocking news that Judith Durham had a stroke after the first concert. Wishing all the very best Judith, heres to a quick and full recovery.


Photo - I did a studio session with Judith Durham in 2008. It was wonderful spending quality time with Judith, a true legend. 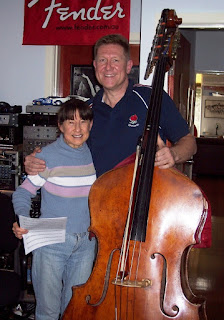 Posted by Stuart Riley at 3:35 AM No comments: