I would have to admit to not being a 100% wagnerite, but Walkure is just awesome. Like many German composers, Wagner really could write well for the bass. Its a great play, Opera North sound just awesome. We had 16 rehearsals, so conductor Richard Farnes was able to work on lots of detail and its really paying off. The travelling is killing me, but its very fulfilling to do this project

We are doing semi staged concert performances of it, as the photo from Leeds Town Hall shows, to the right. I am in there somewhere, stage Right, just to the Left of the 4 harps. Yes, there are four of them, and they sound awesome.

After Walkure its back on the audition trial, starting with a casual audition with Bournemouth Symphony on 25/6. 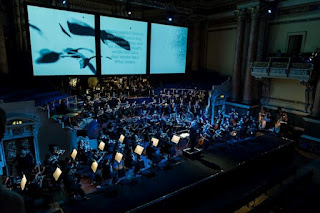 Posted by Stuart Riley at 7:48 AM No comments:

Rain rain go away...
What an awful summer. Thanks to the Gulf Stream we are having abnormally wet weather, even by UK standards.Thank goodness for the roof on centre court at Wimbledon, or else we were be at the 3rd round right now, rather than the ladies finals later today. Another casualty of the weather is my Northern Chamber Orchestra open air gig at Hoghton Towers nr Blackburn, scheduled for later today, but cancelled, for obvious reasons. The brits call these shows "muddy field" gigs. One in Huddersfield last month was just that! At least I am being paid for this one, without having to do the show - which makes it the best muddy field gig EVER!!
Walkure is still going strong - its a fantastic production that is being well attended and very enthusiastically received. I brought Stephen and Esther (my hosts at the Colton Hilton) along to one of the Leeds gigs - they are relatively new to the opera world, and Wagner is probably not the best place to start. I would recommend the some of the Puccini's or Mozart's, at the "shallow end" first, before tackling Wagner in the deep end from the top diving board, but they loved it and Stephen has downloaded it and is listening to it in the car.
I popped down to Poole to do a casual audition with the Bournemouth Symphony on 25th June. They are a lovely section, who put my on the extra list (so they are even lovlier), so with any luck I will get the chance to go and work with them later in the year.
So in a 10 day period I worked in Gateshead, Leeds, Birmingham, London and Poole, nipping back to Bristol in between!

My Australia trip is all fixed up - I leave on 2nd Sept for three months. Most of my work will be with Orchestra Victoria, Swan Lake, a 50th celebration of the Australian Ballet and a number of other orchestral concerts. Next its the Trout with the Firebird Trio in the Melbourne Recital Hall, followed by two weeks with the Tasmanian Symphony Orchestra in November. It should be fun.
Posted by Stuart Riley at 7:47 AM No comments: